Technical Interview Questions In Networking For Freshers and Experienced

Two or more computers are connected directly by an optical fiber or any other cable. A node is a point where a connection is established. It is a network component that is used to send, receive, and forward electronic information.
A device connected to a network has also termed a Node. Let’s consider that in a network there are 2 computers, 2 printers, and a server are connected, then we can say that there are five nodes on the network. 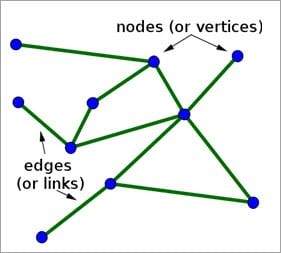 • Hub: Hub will broadcast all data to every port. It has a common connection point for all devices.
• Switch: Switch will create a dynamic connection and provide information to the requesting port.
• Router: The router is the device that will be responsible for forwarding data packets.

What are the advantages of Distributed Processing?

4. What is the OSI reference model?

Open System Interconnection, the name itself suggests that it is a reference model that defines how applications can communicate with each other over a networking system.
It also helps to understand the relationship between networks and defines the process of communication in a network.

5. What is the criteria to check the network reliability?

6. What are the layers in OSI Reference Models? Describe each layer briefly.

Given below are the seven layers of OSI Reference Models:
• Physical Layer (Layer 1): It converts data bits into electrical impulses or radio signals.
• Data Link Layer (Layer 2): At the Data Link layer, data packets are encoded and decoded into bits and it provides a node to node data transfer. This layer also detects the errors that occurred at Layer 1.
• Network Layer (Layer 3): This layer transfers variable length data sequence from one node to another node in the same network. This variable-length data sequence is also known as “Datagrams”.
• Transport Layer (Layer 4): It transfers data between nodes and also provides acknowledgment of successful data transmission. It keeps track of transmission and sends the segments again if the transmission fails.
• Session Layer (Layer 5): This layer manages and controls the connections between computers. It establishes, coordinates, exchanges, and terminates the connections between local and remote applications.
• Presentation Layer (Layer 6): It is also called a “Syntax Layer”. Layer 6 transforms the data into the form in which the application layer accepts.
• Application Layer (Layer 7): This is the last layer of the OSI Reference Model and is the one that is close to the end-user. Both end-user and application layer interacts with the software application. This layer provides services for email, file transfer, etc. 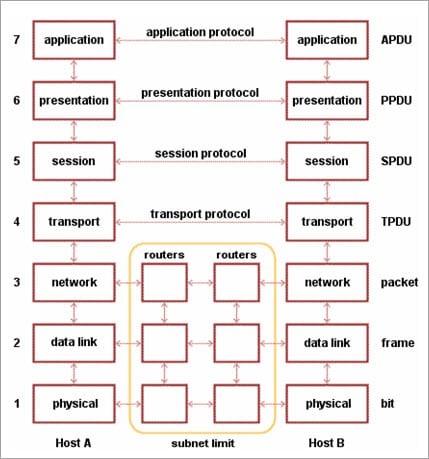 7. Which are the different factors that affect the security of a network?

The most widely used and available protocol is TCP/IP i.e. Transmission Control Protocol and Internet Protocol. TCP/IP specifies how data should be packaged, transmitted, and routed in their end to end data communication.
There are four layers as shown in the below diagram: 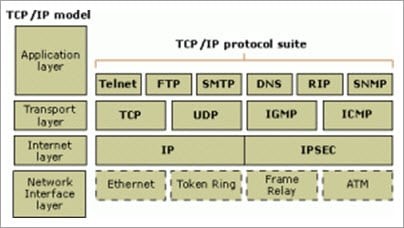 Given below is a brief explanation of each layer:
• Application Layer: This is the top layer in the TCP/IP model. It includes processes that use the Transport Layer Protocol to transmit the data to their destination. There are different Application Layer Protocols such as HTTP, FTP, SMTP, SNMP protocols, etc.
• Transport Layer: It receives the data from the Application Layer which is above the Transport Layer. It acts as a backbone between the host’s system connected with each other and it mainly concerns about the transmission of data. TCP and UDP are mainly used as Transport Layer protocols.
• Network or Internet Layer: This layer sends the packets across the network. Packets mainly contain source & destination IP addresses and actual data to be transmitted.
• Network Interface Layer: It is the lowest layer of the TCP/IP model. It transfers the packets between different hosts. It includes encapsulation of IP packets into frames, mapping IP addresses to physical hardware devices, etc.

9. Which are the different factors that affect the performance of a network?

A link refers to the connectivity between two devices. It includes the type of cables and protocols used for one device to be able to communicate with the other.

11. What are the different types of networks? Explain each briefly.

There are 4 major types of networks.
Let’s take a look at each of them in detail.
Personal Area Network (PAN): It is the smallest and basic network type that is often used at home. It is a connection between the computer and another device such as a phone, printer, modem tablets, etc
Local Area Network (LAN): LAN is used in small offices and Internet cafes to connect a small group of computers to each other. Usually, they are used to transfer a file or for playing the game in a network.
Metropolitan Area Network (MAN): It is a powerful network type than LAN. The area covered by MAN is a small town, city, etc. A huge server is used to cover such a large span of area for connection.
Wide Area Network (WAN): It is more complex than LAN and covers a large span of the area typically a large physical distance. The Internet is the largest WAN which is spread across the world. WAN is not owned by any single organization but it has distributed ownership.
There are some other types of the network as well:
• Storage Area Network (SAN)
• System Area Network (SAN)
• Enterprise Private Network (EPN)
• Passive Optical Local Area Network (POLAN)

12. What are the layers of the OSI reference model?

Routers can connect two or more network segments. These are intelligent network devices that store information in its routing tables, such as paths, hops, and bottlenecks. With this info, they can determine the best path for data transfer. Routers operate at the OSI Network Layer.

15. What is the maximum length allowed for a UTP cable?

A single segment of UTP cable has an allowable length of 90 to 100 meters. This limitation can be overcome by using repeaters and switches.

16. What is data encapsulation?

Data encapsulation is the process of breaking down information into smaller, manageable chunks before it is transmitted across the network. In this process that the source and destination addresses are attached to the headers, along with parity checks.

VPN is the Virtual Private Network and is built on the Internet as a private wide area network. Internet-based VPNs are less expensive and can be connected from anywhere in the world.
VPNs are used to connect offices remotely and are less expensive when compared to WAN connections. VPNs are used for secure transactions and confidential data can be transferred between multiple offices. VPN keeps company information secure against any potential intrusion. 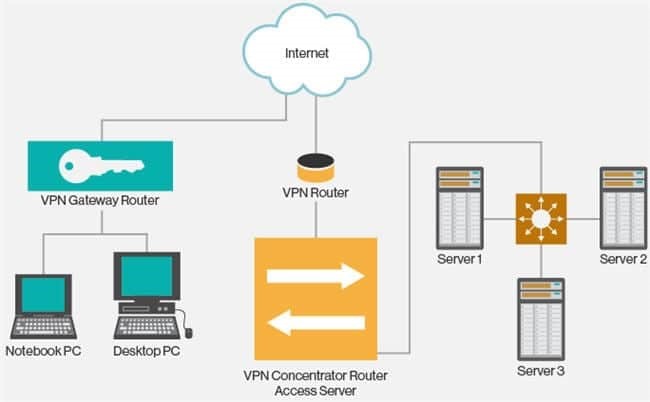 Given below are the 3 types of VPN’s:

Access VPN: Access VPN’s provide connectivity to mobile users and telecommuters. It is an alternative option for dial-up connections or ISDN connections. It provides low-cost solutions and a wide range of connectivity.
Intranet VPN: They are useful for connecting remote offices using shared infrastructure with the same policy as a private network.
Extranet VPN: Using shared infrastructure over an intranet, suppliers, customers, and partners are connected using dedicated connections.

18. What are Ipconfig and Ifconfig?

Ipconfig stands for Internet Protocol Configuration and this command is used on Microsoft Windows to view and configure the network interface.
The command Ipconfig is useful for displaying all TCP/IP network summary information currently available on a network. It also helps to modify the DHCP protocol and DNS setting.
Ifconfig (Interface Configuration) is a command that is used on Linux, Mac, and UNIX operating systems. It is used to configure, control the TCP/IP network interface parameters from CLI i.e. Command Line Interface. It allows you to see the IP addresses of these network interfaces.

It refers to a direct connection between two computers on a network. A point to point connection does not need any other network devices other than connecting a cable to the NIC cards of both computers.
Name the different types of network topologies and brief their advantages?

Network Topology is nothing but the physical or logical way in which the devices (like nodes, links, and computers) of a network are arranged. Physical Topology means the actual place where the elements of a network are located.

Logical Topology deals with the flow of data over the networks. A link is used to connect more than two devices of a network. And more than two links located nearby form a topology.

The advantage of bus topology is that it can be installed easily. And the disadvantage is that if the backbone cable breaks then the whole network will be down.

b) Star Topology: In Star Topology, there is a central controller or hub to which every node or device is connected through a cable. In this topology, the devices are not linked to each other. If a device needs to communicate with the other, then it has to send the signal or data to the central hub. And then the hub sends the same data to the destination device.

c) Ring Topology: In Ring Topology, each device of the network is connected to two other devices on either side which in turn forms a loop. Data or Signal in ring topology flow only in a single direction from one device to another and reaches the destination node.

d) Mesh Topology: In a Mesh Topology, each device of the network is connected to all other devices of the network. Mesh Topology uses Routing and Flooding techniques for data transmission.
The advantage of mesh topology is if one link breaks then it does not affect the whole network. And the disadvantage is, huge cabling is required and it is expensive.

If You Want To Get More Daily Such Jobs Updates, Career Advice Then Join the Telegram Group From Above Link And Never Miss Update.

A Leadership Guide For How To Win Hearts and Minds: Click here

Home Workouts During The Lockdown For Fitness Freaks: Click here

SQL Server Interview Questions and Answers For Freshers and Experienced 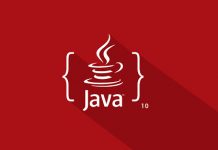 Core Java Interview Questions and Answers For Freshers and Experienced

How To Introduce Yourself In an Interview

Is Tech Career the Right Choice for you?

Resume Format For Fresher: Choose the Right Format of the Resume